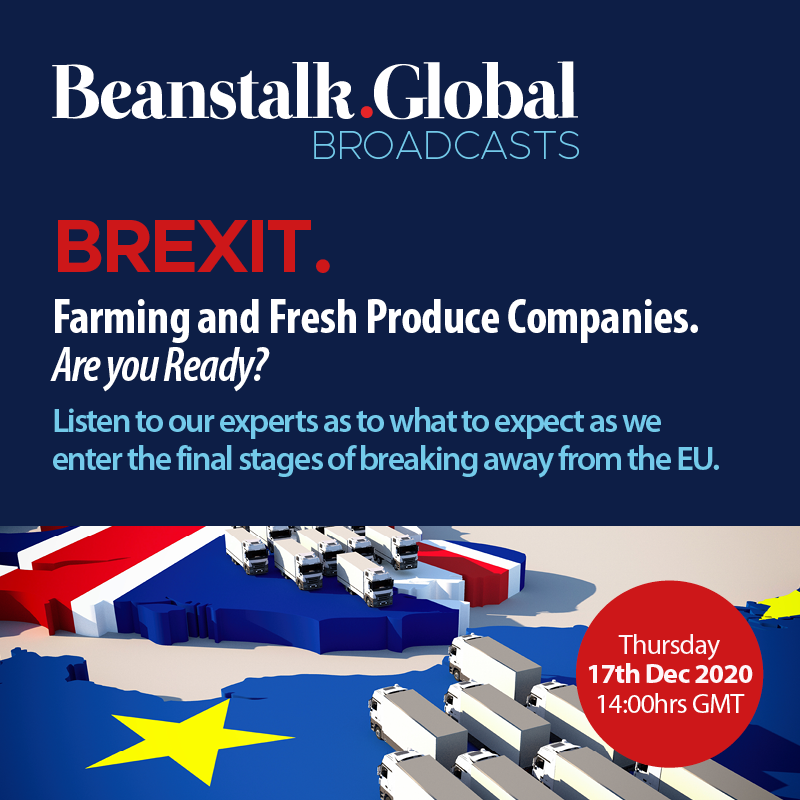 So here we are, the end game for the UK Brexit dream beckons at months end. We conducted a fascinating Broadcast with key industry leaders to gain their views.

Queues are already forming outside UK supermarkets at peak times and shoppers are being told they should expect them to lengthen in the run-up to Christmas as the big four players – market leader Tesco, Sainsbury’s, Asda and Morrisons – and their smaller rivals wrestle with meeting a jump in demand whilst adhering to social distancing requirements. Then, from January, shoppers face the prospect of gaps on shelves if supply lines from the European Union are disrupted.

With nearly one third of Britain’s food coming from the EU, grocers fear significant disruption to their ‘just in time’ supply chains when the Brexit transition period ends shortly after the Christmas rush. Delays of even a few days as post-Brexit customs checks come into force at ports could make fresh produce unsaleable and lead to shortages of some or all products. Supermarket groups have stockpiled where they can but warehouse space is scarce with most required to service Christmas. And although they will seek to build stocks further once Christmas is over, fresh produce such as salad and fruit simply can’t be kept for long periods as we all know. Grocers and supplier will seek to utilise alternative routes to the main Dover-Calais crossing of course but options are limited.

Time is running out to reach a deal before 31st December, when the UK stops following EU trading rules. And has been stated by industry experts “The reality is that we’re leaving Europe, so whether there’s a trade deal or not there’s going to be a level of friction at borders that there historically wasn’t”.

But it will be worth it. Won’t it? As stated by Michael Gove in August 2019 to the BBC – “it’s certainly the case that there will be bumps in the road, some element of disruption in the event of no-deal”

What are the main perceived issues that Farming & Fresh Produce Businesses face in early 2021? What are the solutions? Will it get easier and will we see Brexit “utopia” come Q2 onwards in 2021?

Hear from our range of industry experts to guide and advise you on our full record. We had on our Brexit Broadcast

To view the recording via our live transmission on LinkedIn, just click the picture below.